A downloadable tool for Windows and Linux

A productivity tool made by a master procrastinator.

I don't like being productive nor do I exactly enjoy using productivity tools, I like to get down to business as quickly as possible without being flabbergasted by a million features. After much thinking (instant) I made an app that'd fit my needs. Perhaps, it'll fit yours too!

Talk to us on our discord server

(Krystof aka Lentsius in particular, but don't tell the other otters)

This tool seems really great, I'll be giving it a try! But does it have shareable link feature of any kind? For example so patreon supporters could see what I'm currently working on?

Loving this app so far, though I've noticed that the reminders doesn't seem to be sync'ing up with my time zone?

On the main page, it displays my current time just fine, but if I try to set a reminder for say - 5am (it's 4 am now) - it adds it to the Archive rather than to active reminders even though the time hasn't passed yet. The first hour that it'll add it to active is 9:00, anything between now (4am) and 9am just adds to the archive instead.

I'll test some later today to see if it just won't let me add reminders within 5 hours. It appears to let me set things for those hours starting tomorrow, though.

Will edit with my findings.

amazing tool man! I love the colors and comfy feels. the notes and remainders  I see myself using quite often. I suggest the ability to add sub-task to indent into another task and having it work on mobile would be amazing( saw the mobile sneak peak, super exciting). do you work as a software developer? what experience do you have in programing cuz this is mad good. btw I noticed the entire design of it feels kinda like a game with the task turning green if done, user page, colors, etc . in a good way tho. it feels good seeing a green box out of a see of beautiful blueish-green and warm orange-red. can you make a video of how you made it? how did you decide on the colors? the UI? logic behind the mechanics of each thing? any problems using Godot of all things to make a productivity app? also the day for me is a day behind saying Thursday rather than Friday. another thing I found is the reminders is you have to select and over over the time to add a time to the reminders and the date has to be a day more to not be archived. anyway, I feel really inspired to make my own tool and amazing shit man! sorry for the barrage off critic I do genuinely enjoy using this. i really do think if you go into this game like feel of this, this could be a amazing productivity app. mark rover did a talk of what he dubbed the "Mario effect".  i really think you can make a profit off of this by adding additional tool as premium like color palette, custom noise etc but still keeping it all simple with no extra not needed mechanics as I think the main reason this tool of yours is so great is that everything has a purpose with no wasted or not needed mechanic. sorry to over whelm you again.

is this project open source ? if it is , then can anyone tell me where i can find the github page?

Not open source, over at Mad Cookies, we’re still deciding whether to make it FOSS or not :) if we do the link will be made available over here on the itch page.

In fact, we’ve internally decided to release it on her Thu once we finalize the next update. Which should be withing the next week or so.

awesome app, really slick. The only thing that confuses me are the timed activity. If I close the app and reopen it shouldn't it just calculate the time passed since I first started it for the current activity?

Indeed! We’re working on an update, and this specifically is a bug we closed a few days ago.

any chance of a macos export?

Sadly I don’t have access to a mac, nor have I ever exported to it. Is it a straight forward process, do you know?

It "just works" with the caveat that without a Mac, you can't sign and notarize the build. So users who download it will have to remove it from quarantine and jump through some hoops to get it to run on macOS Catalina and newer.

But by now that's something many might be used to with indie projects. If you make it clear to users that can work. We're actually adding some details to the Godot docs soon that you will be able to link to for macOS users to workaround limitations of un-notarized binaries. https://github.com/godotengine/godot-docs/pull/5105

Thanks for the reply! I’ll do so for the next release, also informing the users of the caveat.

If you dont have mac , then why dont you try using virtual machines like oracle vm?

I am not tech savvy enough

when are we getting 32bit build

Had no idea there’s a demand for it! I’ll be sure to export the next version with 32 bit support then.

thanks ! BTW this app is perfect for android phones and tabs .Can you create a .apk build if possible ?
Also can you tell me if any plugins were used during production

Only one plugin was used, a calendar button! Apart from that it’s vanilla Godot. As for a mobile version, absolutely! I’ve already drafted a concept of something I imagine functional: 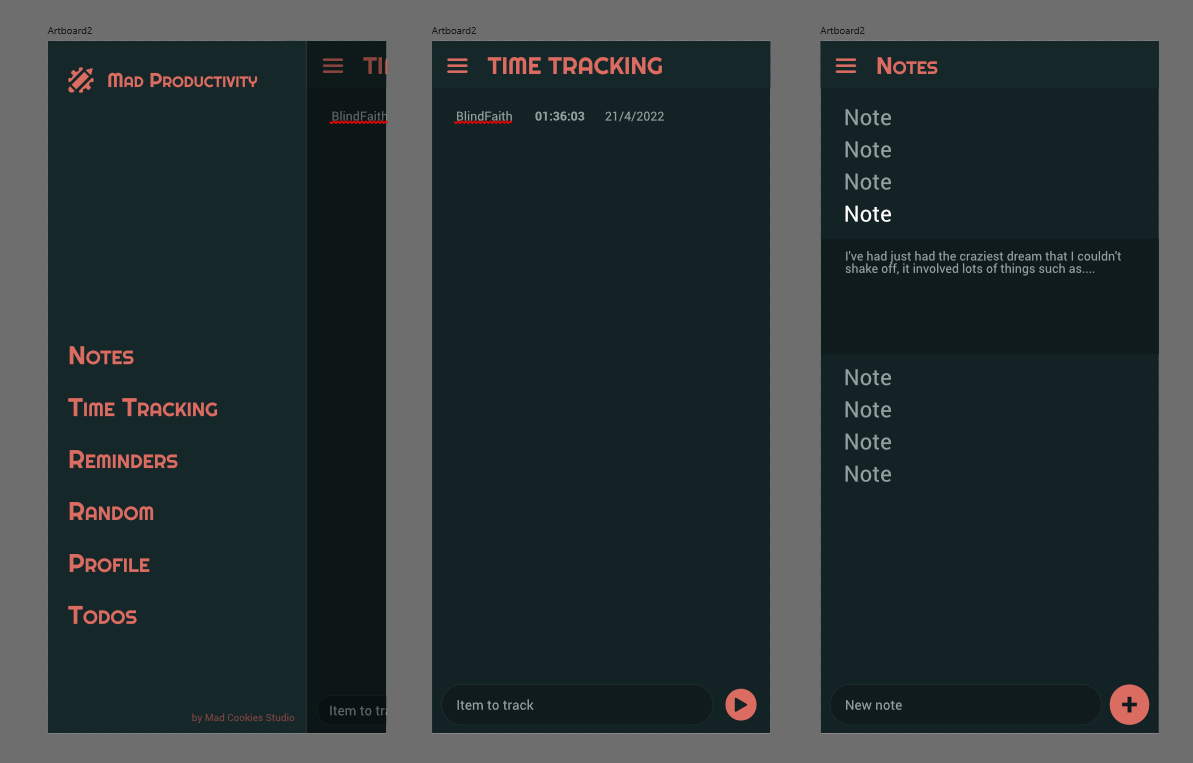 So it’s in the plans, as well as having a way of connecting your desktop and mobile client.

Also, just exporting the current version to a mobile platform wouldn’t sadly work. the input fields and columns in “Notes” especially arent designer for mobile at all. The tabs on the side additionally waste valuable horizontal space that could otherwise be taken up by content. Although, thinking about it now, perhaps the concept could be reworked to resemble the original tab panel more closely. Food for thought!

Godot’s pretty awesome at it. Thanks!

Found a weird bug, if you scale the window to much you can't click on the remainders clock to set it, other than thati love it.

Hey that’s a super interesting bug, I’m jotting it down right away, thanks!

I have been looking for alot of productivity related tools lately. And this one is looking pretty good! Can't wait to try it!

Where were you all these months ;-;

And this is a complete coincidence that my name is also MAD :D

Procrastinating ofc! 😃 Love the coincidence btw, feels like we’ve tailer made an app for you now.

Awesome app the less features the better. i love it. the animations are great.

Hey! Thanks I’m really glad you like it! It was designed with simplicity and straight-forwardness in mind, it’s lovely to hear it’s come appreciated.