A downloadable game for Windows, macOS, and Linux

This piece was incredible to develop! I've stream the development actively, features kept on pouring in and truth be told much more was done than I had originally planned for the release of this post-jam update. Enough in order for it to gain the full fledged title of a demo! Coming in at around 60 minutes of gameplay and weirdly satisfying visuals, it's sure to have you enjoying it.

At the beginning you were but a box. But as life would have it, not even your angular nature could fight the one rule, the one constant, the fact that everything changes. And so did you! You became a super round self-aware ball that now explores its own limits under the watch of a delivery AI.

Use the world map (M) to travel between levels once you've found it within the world, unlock bonus levels with the diamonds you find and observe which level has what resources.

There is a lot of potential in this type of game. I did have a few issues with my time probably due to my device I am running it on. It initially had a terrible frame rate due to the use of high quality graphics. Mix a poor frame rate with precision platforming (which for me didn't really work correctly because of the momentum) and it made it difficult for me to enjoy. I really do hope this project goes places since I would love to play it in the best way I could but right now I think it needs some adjustments for users who lack high power machines. Even providing some documentation about minimum specs for the game or even for different "performance" modes would greatly help.

This was so much fun! Movement was just the right amount of challenging, but not so hard that the levels weren't fun. Love the design, music, portal-style narrator. Really nice work!

Thanks for playing the game! If you had the power and could add any one thing, and remove any one thing form the game, what would they be?

Hmmm. Besides more levels, it would be fun to have a few more challenging course obstacles (maybe only optional for those that want) like a loop or really long jumps, or maybe a horizontal cylinder that rotates so you have to roll forwards and sideways to cross it. I guess more variety in obstacles is what I'm saying. The player can really move quick and it was fun trying precision jumps from the tops of the towers to a tiny platform on the other side of the level.

I don't think I'd remove anything, but maybe move the stats from being always next to the player to a traditional UI element. It was a bit annoying to have to rotate my view to see how many diamonds/speakers I hadn't found yet, and I kept seeing it and thinking I was seeing a diamond I had missed, only to realize it was the diamond on the stats card lol.

Ohoho! This is fantastic feedback, thanks!

alright first of all, i really love the look of the game, man. the visuals look very appealing! :D

now as for the gameplay, i was able to have quite a stable FPS for my potato setup, something between 20 to 30 FPS i think, lol.

the movement does feel like everything's slippery, and the camera sensitivity was too sensitive for me although it's easy to get used it nonetheless.

similar to the first feedback comment here, the fire's collision area could be a bit smaller or at least make it look like the particles hit the player before dying. i'll also add request that maybe you could try implementing where you stop moving on slopes, but if that'll be fixed when you adjust the movement's friction, you can disregard that request. :P

i've also sent you a video on twitter of a weird glitch or bug where the player just freaks out. restarting the game doesn't fix it either. :<

that's all i could say pretty much, i also wasn't able to play the game for too long since i get laggy and the movement's pretty difficult. looking forward to improvements of the game though! cheers :D

IMO, 20-30 fps isn’t ideal. I’ll try to provide the user with graphics settings in future builds so that they can set the game up in a way that hits the 60fps bar.

regarding this other parts of your feedback, I’ll be compiling them down a longer note and address the main issues in a future stream :)

Issues:
- FOV and camera motion gives me motion sickness. I'm specially weak against it, so I need to tweak fov heavily in every fps game I play. Having no fov control makes me unable to play the game for +10mins without my eyes hurting real bad. Probably a very niche issue, but just letting you know.
- Friction doesn't feel like cardboard, it feels like ice. Takes way too long to stop, which makes the game feel very unresponsive.
- Air control suffers from the same effect, specially when going up the elevators with some inertia from getting into them. The tutorial stages should feel easy, but they are really hard because of this.
- Fire kills you before the particles visually collide with you. Can have situations where there is no way to know if you are going to be killed, since the fire may activate before you pass (even if you don't see fire in your screen).
- Camera clips really weird against walls and against the boxes if you are holding one and look straight down (at least on top of the tower with two boxes, third level)

Sorry that I couldn't put some time into finding more positive things. Motion sickness makes me feel really bad, and I literally can't play for more than 10mins T_T

for the feedback! Fantastic amount of things, I’ve already copied it over to my personal folder and am forming a task list of things based on all the feedback I’ve been getting. Super glad you gave it a go even though its still such an early prototype :) 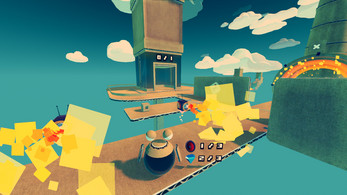 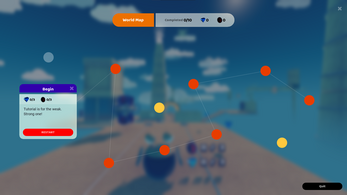 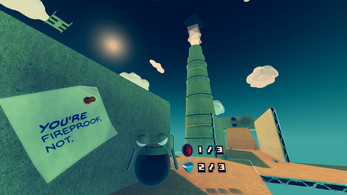